Osiris, Volume 11: Science in the Field 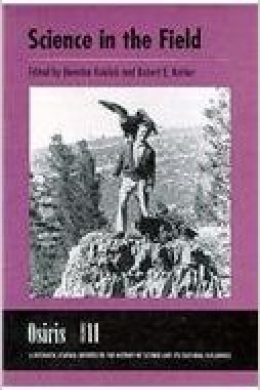 Unlike many histories of scientific practices, which deal with laboratory experiments, this collection of essays focuses on scientific investigations conducted out of doors: biological, physical, and social. Case studies from varied disciplines explore the material, human, and cultural aspects of fieldwork, and the relationships between scientific activity and popular outdoor activities such as exploration and recreation.

Included are "Gender, Culture, and Astrophysical Fieldwork: Elizabeth Campbell and the Lick Observatory-Crocker Eclipse Expeditions," by Alex Soo-jung-Kim Pang; "Wallace in Other Lands," by Jane Camerini; "The Heroic Science of Glacier Motion," by Bruce Hevly; "Objectivity or Heroism: Invisibility of Women in Science," by Naomi Oreskes; "When Nature is the Zoo: Vision and Power in the Art and Science of Natural History," by Gregg Mitman; "Manly Men in Scientific Balloons: Meteorology and the Victorian Scientist as Romantic Hero," by Jennifer Tucker; "Paul du Chaillu and Construction of Authority," by Stuart McCook; "Of Sangfroid and Sphinx Moths: Cruelty, Public Relations, and Entomology, 1800-1840," by Anne Larsen Hollerbach; "The Ship as a Scientific Instrument in the 18th Century," by Richard Sorrenson; and "'A Tent with a View:' Colonial Officers, Anthropologists, and the Making of the Field in Northern Rhodesia, 1937-1960," by Lynette Schumaker.