Wired Wilderness: Technologies of Tracking and Making of Modern Wildlife 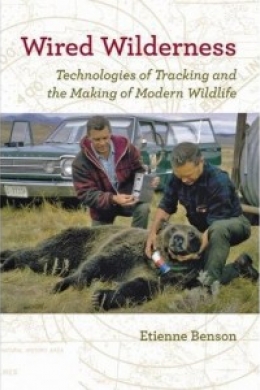 American wildlife biologists first began fitting animals with radio transmitters in the 1950s. By the 1980s the practice had proven so useful to scientists and nonscientists alike that it became global. Wired Wilderness is the first book-length study of the origin, evolution, use, and impact of these now-commonplace tracking technologies.

Combining approaches from environmental history, the history of science and technology, animal studies, and the cultural and political history of the United States, Etienne Benson traces the radio tracking of wild animals across a wide range of institutions, regions, and species and in a variety of contexts. He explains how hunters, animal-rights activists, and other conservation-minded groups gradually turned tagging from a tool for control into a conduit for connection with wildlife. Drawing on extensive archival research, interviews with wildlife biologists and engineers, and in-depth case studies of specific conservation issues—such as the management of deer, grouse, and other game animals in the upper Midwest and the conservation of tigers and rhinoceroses in Nepal—Benson illuminates telemetry's context-dependent uses and meanings as well as commonalities among tagging practices.

Wired Wilderness traces the evolution of the modern wildlife biologist’s field practices and shows how the intense interest of nonscientists at once constrained and benefited the field. Scholars of and researchers involved in wildlife management will find this history both fascinating and revealing.