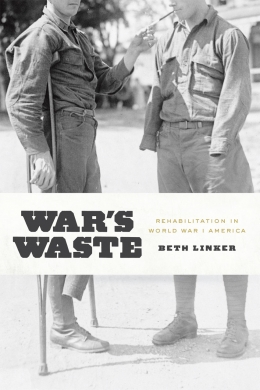 With US soldiers stationed around the world and engaged in multiple conflicts, Americans will be forced for the foreseeable future to come to terms with those permanently disabled in battle. At the moment, we accept rehabilitation as the proper social and cultural response to the wounded, swiftly returning injured combatants to their civilian lives. But this was not always the case, as Beth Linker reveals in her provocative new book, War’s Waste.

Linker explains how, before entering World War I, the United States sought a way to avoid the enormous cost of providing injured soldiers with pensions, which it had done since the Revolutionary War. Emboldened by their faith in the new social and medical sciences, reformers pushed rehabilitation as a means to “rebuild” disabled soldiers, relieving the nation of a monetary burden and easing the decision to enter the Great War. Linker’s narrative moves from the professional development of orthopedic surgeons and physical therapists to the curative workshops, or hospital spaces where disabled soldiers learned how to repair automobiles as well as their own artificial limbs. The story culminates in the postwar establishment of the Veterans Administration, one of the greatest legacies to come out of the First World War.