Three Shots at Prevention: The HPV Vaccine and the Politics of Medicine's Simple Solutions 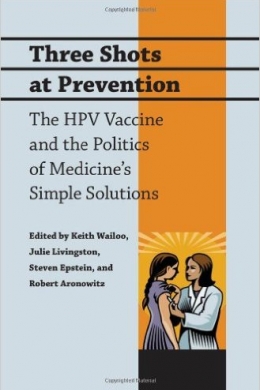 In 2007, Texas governor Rick Perry issued an executive order requiring that all females entering sixth grade be vaccinated against the human papillomavirus (HPV), igniting national debate that echoed arguments heard across the globe over public policy, sexual health, and the politics of vaccination. Three Shots at Prevention explores the contentious disputes surrounding the controversial vaccine intended to protect against HPV, the most common sexually transmitted infection.

When the HPV vaccine first came to the market in 2006, religious conservatives decried the government's approval of the vaccine as implicitly sanctioning teen sex and encouraging promiscuity while advocates applauded its potential to prevent 4,000 cervical cancer deaths in the United States each year. Families worried that laws requiring vaccination reached too far into their private lives. Public health officials wrestled with concerns over whether the drug was too new to be required and whether opposition to it could endanger support for other, widely accepted vaccinations. Many people questioned the aggressive marketing campaigns of the vaccine's creator, Merck & Co. And, since HPV causes cancers of the cervix, vulva, vagina, penis, and anus, why was the vaccine recommended only for females? What did this reveal about gender and sexual politics in the United States? With hundreds of thousands of HPV-related cancer deaths worldwide, how did similar national debates in Europe and the developing world shape the global possibilities of cancer prevention?

This volume provides insight into the deep moral, ethical, and scientific questions that must be addressed when sexual and social politics confront public health initiatives in the United States and around the world.