Moments of Truth in Genetic Medicine 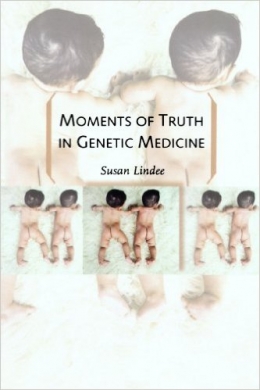 Genetic research increasingly dominates medical thought and practice in the United States and in many other industrialized nations. Susan Lindee's original study explores the institutions, disciplines, and ideas that initiated the reconfiguration of genetic medicine from a marginal field in the mid-1950s to a core research frontier of biomedicine.

Tracing the work of geneticists and other experts in identifying and classifying disease during the explosive period between 1950 and 1980, Lindee identifies the individual "moments of truth" that moved the field away from its eugenic past to the center of a new world view in which nearly all disease is understood to be fundamentally genetic. She suggests that these moments of truth were experienced not only by scientists but also by those who had familial, intimate, emotional knowledge of hereditary disease: patients, family members, and research subjects.

Focusing on benchmarks in the field―such as the rise of neonatal testing in the 1960s, genetic studies of unique human populations such as the Amish, the development of human cytogenetics and human behavioral genetics, and the efforts to find genes for rare diseases such as familial dysautonomia―she tracks the emergence of a biomedical consensus that nearly all disease is genetic disease.

Using the success of this field as a point of entry, Lindee chronicles both the production of knowledge in biomedicine and changes in the cultural meaning of the body in the late twentieth century. She suggests that scientific knowledge is a community project that is shaped directly by people in many different social and professional locations. The power to experience and report scientific truth may be much more dispersed than it sometimes appears, because people know things about their own bodies, and their knowledge has often been incorporated into the technical infrastructure of genomic medicine.