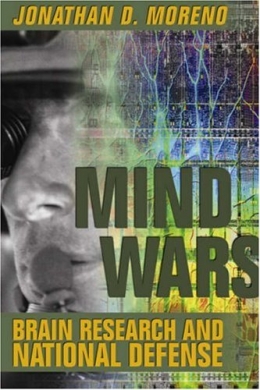 In his fascinating new book, Jonathan D. Moreno investigates the deeply intertwined worlds of cutting-edge brain science, U.S. defense agencies, and a volatile geopolitical landscape where a nation's weaponry must go far beyond bombs and men. The first-ever exploration of the connections between national security and brain research, Mind Wars: Brain Research and National Defense reveals how many questions crowd this gray intersection of science and government and urges us to begin to answer them.

From neuropharmacology to neural imaging to brain-machine interface devices that relay images and sounds between human brains and machines, Moreno shows how national security entities seek to harness the human nervous system in a multitude of ways as a potent weapon against the enemy soldier. Moreno charts such projects as monkeys moving robotic arms with their minds, technology to read the brain’s thought patterns at a distance, the development of "anti-sleep" drugs to enhance soldiers’ battle performance and others to dampen their emotional reactions to the violence, and advances that could open the door to "neuroweapons"—virus-transported molecules to addle the brain.

"As new kinds of weapons are added to the arsenal already at the disposal of fallible human leaders," Moreno writes, "we need to find new ways to address the problem"--of the ethical military application of so powerful and intimate a science. This book is the first step in confronting the quandaries inherent in this partnership of government and neuroscience, serves as a compelling wake-up call for scientists and citizens, and suggests that, with imagination, we might meet the needs of both security and civil liberty.