Impromptu Man: J.L. Moreno and the Origins of Psychodrama, Encounter Culture, and the Social Network 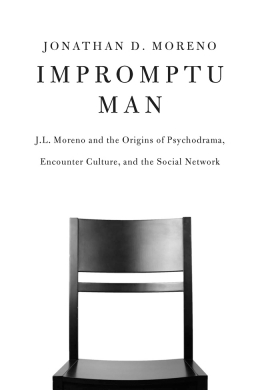 A mystic, theater impresario and inventor in his youth, Moreno immigrated to America in 1926, where he trained famous actors, introduced group therapy, and was a forerunner of humanistic psychology. As a social reformer, he reorganized schools and prisons, and designed New Deal planned communities for workers and farmers. Moreno’s methods have been adopted by improvisational theater groups, military organizations, educators, business leaders, and trial lawyers. His studies of social networks laid the groundwork for social media like Twitter and Facebook.

Featuring interviews with Clay Shirky, Gloria Steinem, and Werner Erhard, among others, original documentary research, and the author’s own perspective growing up as the son of an innovative genius, Impromptu Man is both the study of a great and largely unsung figure of the last century and an epic history, taking readers from the creative chaos of early twentieth-century Vienna to the wired world of Silicon Valley.