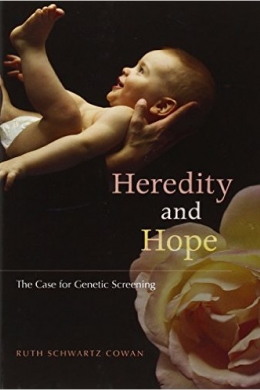 The secrets locked in our genes are being revealed, and we find ourselves both enthused and frightened about what that portends. We look forward to curing disease and alleviating suffering―for our children as well as for ourselves―but we also worry about delving too deeply into the double helix. Abuses perpetrated by eugenicists―from involuntary sterilization to murder―continue to taint our feelings about genetic screening.

Yet, as Ruth Schwartz Cowan reveals, modern genetic screening has been practiced since 1960, benefiting millions of women and children all over the world. She persuasively argues that new forms of screening―prenatal, newborn, and carrier testing―are both morally right and politically acceptable. Medical genetics, built on the desire of parents and physicians to reduce suffering and increase personal freedom, not on the desire to “improve the human race,” is in fact an entirely different enterprise from eugenics.

Cowan’s narrative moves from an account of the interwoven histories of genetics and eugenics in the first half of the twentieth century, to the development of new forms of genetic screening after mid-century. It includes illuminating chapters on the often misunderstood testing programs for sickle cell anemia, and on the world’s only mandated premarital screening programs, both of them on the island of Cyprus.

Neither minimizing the difficulty of the choices that modern genetics has created for us nor fearing them, Cowan bravely and compassionately argues that we can improve the quality of our own lives and the lives of our children by using the modern science and technology of genetic screening responsibly.