Healing the Herds: Disease, Livestock Economies, and the Globalization of Veterinary Medicine 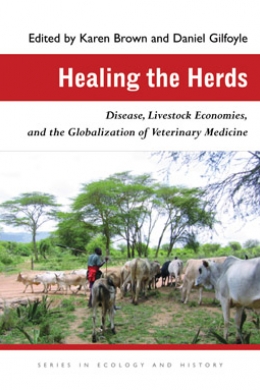 Healing the Herds: Disease, Livestock Economies, and the Globalization of Veterinary Medicine offers a new and exciting
comparative approach to the complex interrelationships of microbes, markets, and medicine in the global economy. It draws upon fourteen case studies from the Americas, western Europe, and the European and Japanese colonies to illustrate how the rapid growth of the international trade in animals through the nineteenth century engendered the spread of infectious diseases, sometimes with devastating consequences for indigenous pastoral societies.

At different times and across much of the globe, livestock epidemics have challenged social order and provoked state interventions, which were sometimes opposed by pastoralists. The intensification of agriculture has transformed environments, with consequences for animal and human health. But the last two centuries have also witnessed major changes in the way societies have conceptualized diseases and sought to control them. The rise of germ theories and the discovery of vaccines against some infections made it possible to move beyond the blunt tools of animal culls and restrictive quarantines of the past. Nevertheless, these older methods have remained important to strategies of control and prevention, as demonstrated during the recent outbreak of foot and mouth disease in Britain in 2001.

From the late nineteenth century, advances in veterinary technologies afforded veterinary scientists a new professional status and allowed them to wield greater political influence. In the European and Japanese colonies, state support for biomedical veterinary science often led to coercive policies for managing the livestock economies of the colonized peoples. In western Europe and North America, public responses to veterinary interventions were often unenthusiastic and reflected a latent distrust of outside interference and state regulation. Politics, economics, and science inform these essays on the history of animal diseases and the expansion in veterinary medicine.