Granting the Seasons: The Chinese Astronomical Reform of 1280, With a Study of Its Many Dimensions and a Translation of its Records 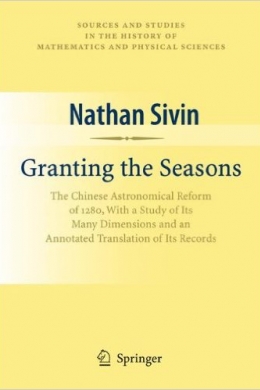 China’s most sophisticated system of computational astronomy was created for a Mongol emperor who could neither read nor write Chinese, to celebrate victory over China after forty years of devastating war. This book explains how and why, and reconstructs the observatory and the science that made it possible.

For two thousand years, a fundamental ritual of government was the emperor’s “granting the seasons” to his people at the New Year by issuing an almanac containing an accurate lunisolar calendar. The high point of this tradition was the “Season-granting system” (Shou-shih li, 1280). Its treatise records detailed instructions for computing eclipses of the sun and moon and motions of the planets, based on a rich archive of observations, some ancient and some new.

Sivin, the West’s leading scholar of the Chinese sciences, not only recreates the project’s cultural, political, bureaucratic, and personal dimensions, but translates the extensive treatise and explains every procedure in minimally technical language. The book contains many tables, illustrations, and aids to reference. It is clearly written for anyone who wants to understand the fundamental role of science in Chinese history. There is no comparable study of state science in any other early civilization.