Genetic Nature/Culture: Anthropology and Science beyond the Two-Culture Divide 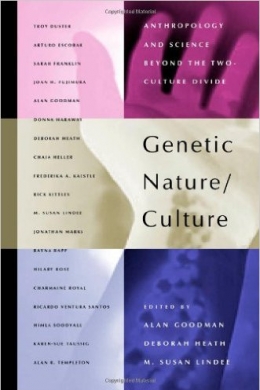 The so-called science wars pit science against culture, and nowhere is the struggle more contentious—or more fraught with paradox—than in the burgeoning realm of genetics. A constructive response, and a welcome intervention, this volume brings together biological and cultural anthropologists to conduct an interdisciplinary dialogue that provokes and instructs even as it bridges the science/culture divide.

Individual essays address issues raised by the science, politics, and history of race, evolution, and identity; genetically modified organisms and genetic diseases; gene work and ethics; and the boundary between humans and animals. The result is an entree to the complicated nexus of questions prompted by the power and importance of genetics and genetic thinking, and the dynamic connections linking culture, biology, nature, and technoscience. The volume offers critical perspectives on science and culture, with contributions that span disciplinary divisions and arguments grounded in both biological perspectives and cultural analysis. An invaluable resource and a provocative introduction to new research and thinking on the uses and study of genetics, Genetic Nature/Culture is a model of fruitful dialogue, presenting the quandaries faced by scholars on both sides of the two-cultures debate.