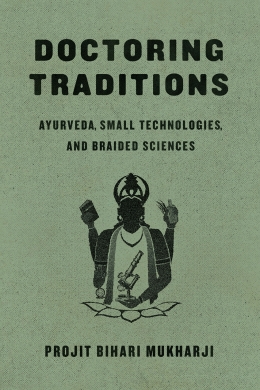 Like many of the traditional medicines of South Asia, Ayurvedic practice transformed dramatically in the later nineteenth and early twentieth centuries. With Doctoring Tradition, Projit Bihari Mukharji offers a close look at that recasting, upending the widely held yet little-examined belief that it was the result of the introduction of Western anatomical knowledge and cadaveric dissection.

Rather, Mukharji reveals, what instigated those changes were a number of small technologies that were introduced in the period by Ayurvedic physicians, men who were simultaneously Victorian gentlemen and members of a particular Bengali caste. The introduction of these devices, including thermometers, watches, and microscopes, Mukharji shows, ultimately led to a dramatic reimagining of the body. By the 1930s, there emerged a new Ayurvedic body that was marked as distinct from a biomedical body. Despite the protestations of difference, this new Ayurvedic body was largely compatible with it. The more irreconcilable elements of the old Ayurvedic body were then rendered therapeutically indefensible and impossible to imagine in practice. The new Ayurvedic medicine was the product not of an embrace of Western approaches, but of a creative attempt to develop a viable alternative to the Western tradition by braiding together elements drawn from internally diverse traditions of the West and the East.