Deciding Together: Bioethics and Moral Consensus 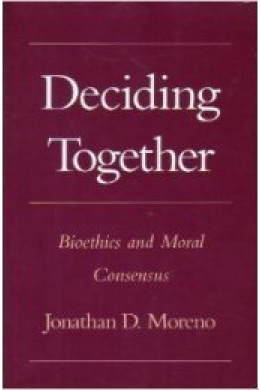 Western society today is less unified by a set of core values than ever before. Undoubtedly, the concept of moral consensus is a difficult one in a liberal, democratic and pluralistic society. But it is imperative to avoid a rigid majoritarianism where sensitive personal values are at stake, as in bioethics. Bioethics has become an influential part of public and professional discussions of health care. It has helped frame issues of moral values and medicine as part of a more general effort to find consensus about some of the most perplexing questions of our time. But why is it thought that a moral consensus is important or that it deserves respect? How does moral consensus acquire legitimacy in a society that includes diverse value systems? How is moral consensus possible and how do small groups help create or distort consensus processes?
Written by a medical school professor trained in philosophy, this timely work tackles these questions from philosophical, historical, and social scientific standpoints. It begins by describing the traditional ambivalence about consensus in Western culture as well as the uncertain relationship in modernity between consensus and expertise. After outlining the current bioethical consensus, the book gives philosophical and political analyses of the idea of consensus, then assesses the role of consensus in national ethics commissions and in the ethics committee movement. Moreno constructs an original, naturalistic philosophy of moral consensus, referred to as "bioethical naturalism", and then applies sociology and social psychology to actual consensus processes. The book concludes with an account of bioethics as a consensus-oriented social reform movement. This insightful volume will be essential reading for bioethicists, philosophers, physicians, members of ethics committees, and all those concerned with ethical and social issues in health care.